Joe Gaiter: What does cheerleading mean to you?

Nyla Jones: Cheerleading means a lot to me because it is where I met a lot of my closest friends and created lifelong relationships. It’s where I can have fun and it gives me something to look forward to each year. It is also a good way to stay in shape year-round and work hard.

Nyla Jones: I grew up in PG County and Waldorf, Maryland. My childhood was a typical, normal one. I played many different sports growing up including basketball, gymnastics, and softball. Academics were also a big deal in my house, so I didn’t like to come home with any grade other than an A. 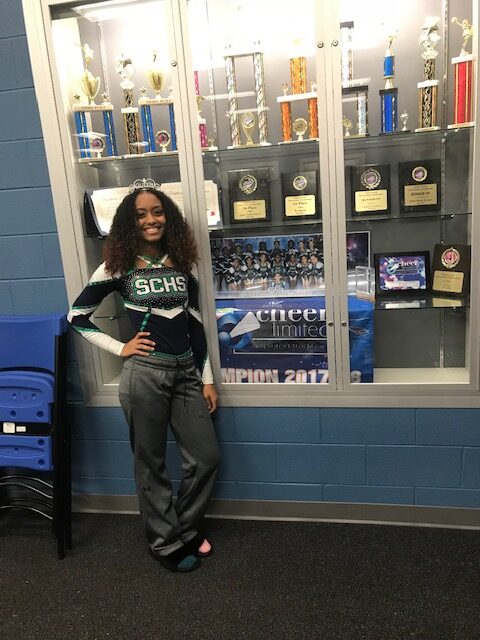 Joe Gaiter: What is your cheerleading history before college?

Nyla Jones: I first started cheerleading when I entered high school. Before that, I was an on and off gymnast and dancer. I didn’t know much about cheerleading until I tried out in the 9th grade, where I made the Varsity team. I stayed on Varsity at my high school until I graduated in 2018 as the captain. In those four years I progressed tremendously and fell in love with competitive cheer.

Joe Gaiter: Why did you choose NC A&T?

Nyla Jones: I chose NC A&T mostly because they gave me a full academic scholarship. I really didn’t know about A&T before I was offered, except that my older cousin said that she wanted to go there. I just applied to multiple schools across the east coast to see which ones I would be accepted to and who gave me the most money. After visiting A&T and researching it online, I knew that this was a good choice for me.

Joe Gaiter: Tell us about the cheerleading culture at NC A&T?

Nyla Jones: The cheerleading culture at A&T can be described as exhilarating, competitive, and traditional. It can be very exciting and fun at game days and sometimes even practice, but you must work hard in order to get to that point. The culture is also traditional because alumni are a major part and component of the cheer program at A&T. You must learn to respect the roots, ethics, and traditions of the cheerleaders who came before you.

Joe Gaiter: What does it take to be a good cheerleader?

Nyla Jones: In my opinion, to be a good cheerleader you must be well rounded in all skills and have good technique. That includes jumps, tumbling, stunting, as well as having tight motions and a loud voice for game day. 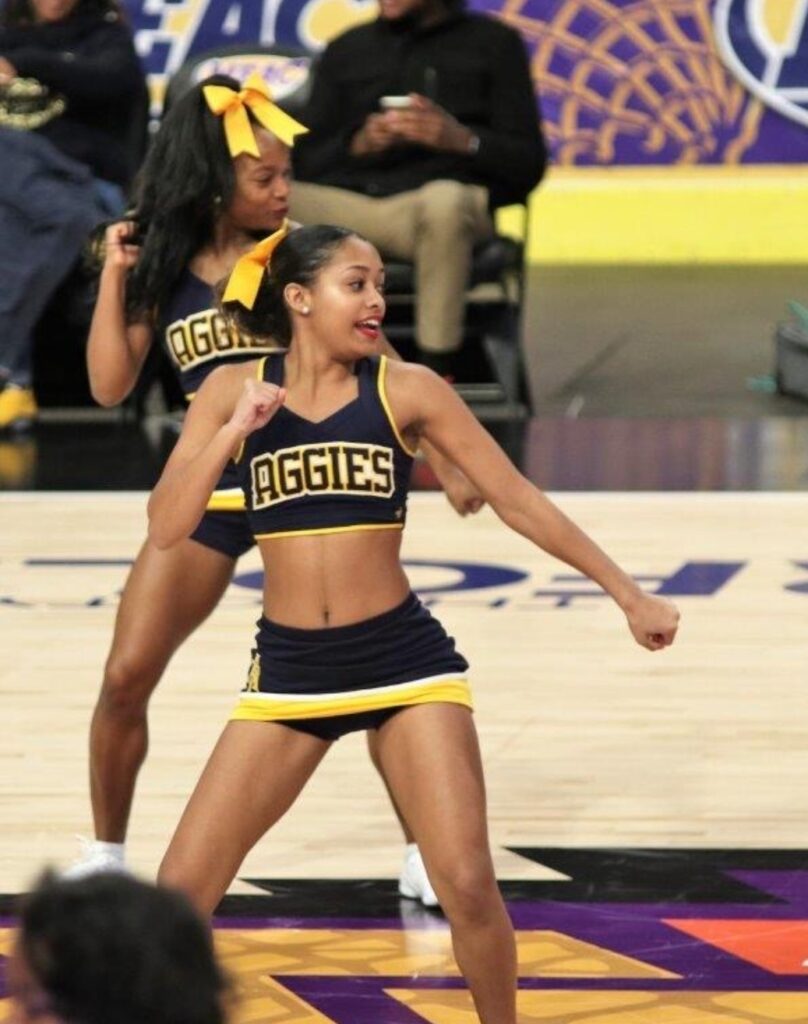 Joe Gaiter: Tell us about the game-day atmosphere at NC A&T?

Nyla Jones: The football game-day atmosphere at A&T is like nothing you’ve ever experienced. Being the largest HBCU, you see so many people of your culture just having fun, enjoying each other’s company. Having the #1 band and football team also helps because you know nothing other than greatness and constant winning.

Joe Gaiter: What all goes into training during the season and post?

Nyla Jones: Training for college cheer is a lot different than people probably imagine. We have some sort of training almost every day, except Sundays, if you count weight training twice a week in the mornings. Running miles and running aggie stadium are basically tradition for aggie cheer so you be prepared to work hard or go home. It doesn’t just end when the season is over either because you must train just as hard on the offseason to remake the team the following season.

Joe Gaiter: What is the hardest part of cheerleading?

Nyla Jones: The hardest part about cheerleading to me would have to be either stunting or tumbling because you can always improve and do harder skills. You basically start at a cartwheel or a prep and the possibilities to do harder things are endless. 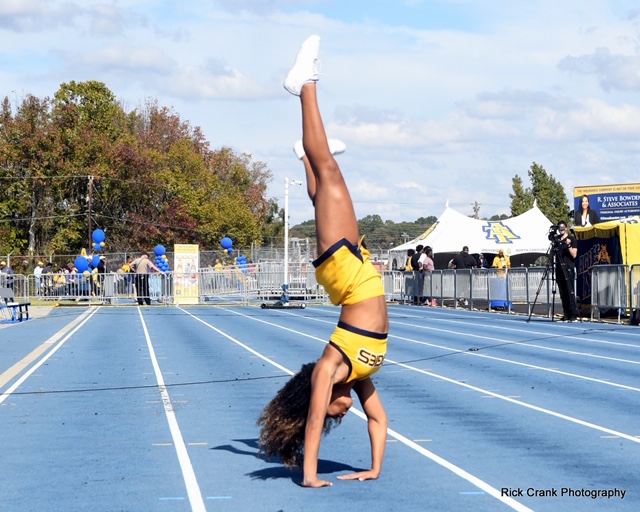 Joe Gaiter: What is your favorite stunt?

Nyla Jones: My favorite stunt is probably a high-to-high or multiple tick-tocks because I think it looks very clean and paired with good music it looks good.

Joe Gaiter: Do you feel like cheerleaders do not get the same respect as other athletes of different sports??

Nyla Jones: I 100% believe that cheerleaders do not get the same respect as other athletes of different sports. I agree that sideline cheerleading is not a sport, but there is no way that competitive cheerleading shouldn’t be considered a sport. Some people have been training all their lives to become world champions at the sport they love, and cheerleading is no different. We wake up at 5 am to practice, run stadiums and miles, get knocked down and hurt daily. Yet, we are still expected to look pretty and fit for gameday. 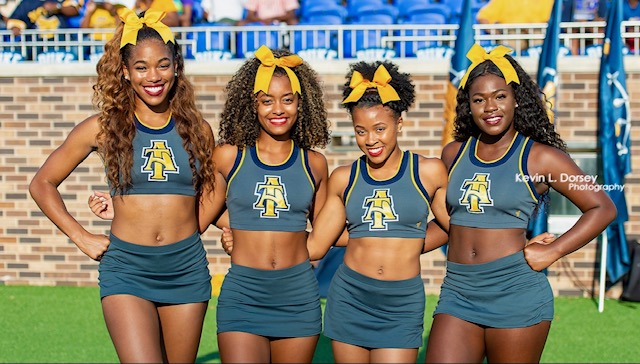 Joe Gaiter: What is life like for you outside of cheerleading?

Nyla Jones: My life outside of cheerleading just revolves around my family, friends, and ambitions. I spend a lot of time preparing for my future career and trying new things. I also am a lifeguard in the summer and a softball umpire as well.

Nyla Jones: I major in Accounting at A&T and I eventually plan to become a CFO in the sports and entertainment industry. I think that the world needs more African American women in that industry as well as more CPA’s.

Joe Gaiter: What motivates you?

Nyla Jones: My motivation is to make my parents proud and to be successful in the future. They have sacrificed a lot to provide for me and my sister and it is only right that I show them how much I appreciate them and care. I also have to put in the work now if I want to truly be successful later on in life. 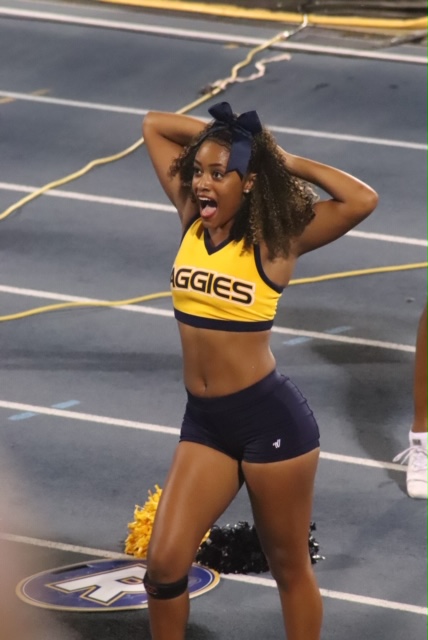 Nyla Jones: You are bold and you are beautiful; you are capable of achieving great things.

Nyla Jones: I want to shout out my team and coaches, my family, and my friends who have always supported me.