Corey Brown: Football for me is a lifestyle. It teaches lessons and shows true characteristics of people and how they handle situations or circumstances. It is also a gateway for many opportunities that I have been blessed with and it has helped to mold me to be the man I am today.

Corey Brown: I grew up in southeast Washington D.C. My childhood was very rough but with the strength of God and my mother’s will we managed to overcome many obstacles which has brought me to where I am today.

Joe Gaiter: What are your fondest memories about Avalon High School?

Corey Brown: Just overcoming a lot of things that were troubling in my personal life, maturing quickly and adapting enough to not allow it to affect me on the field. Also, learning on how to be accountable as a man and a player and learning responsibility of a young man that helped me get to college. 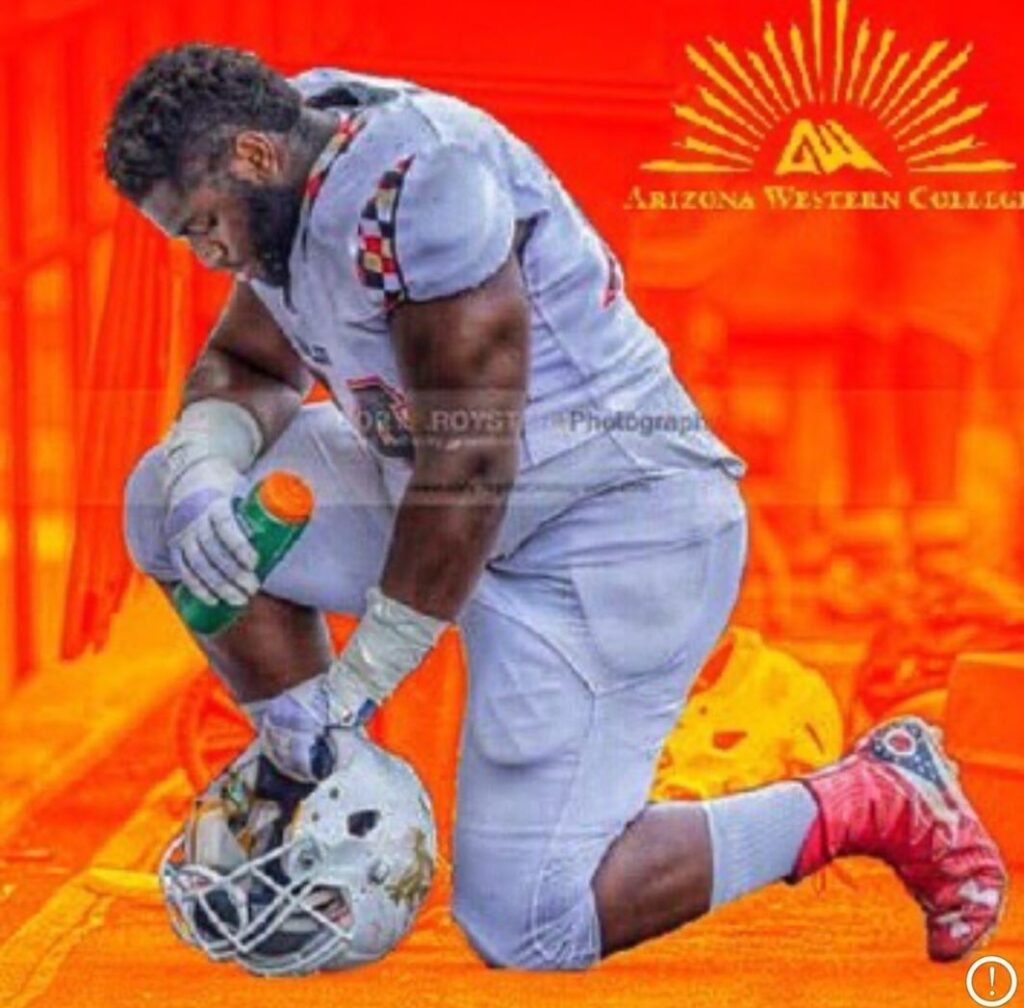 Joe Gaiter: Tell us about your recruitment experience?

Corey Brown: The recruitment out of high school was a humbling experience. I was scouted since my sophomore year and was scouted by highest FBS and FCS schools such as Virginia Tech, Georgia, Ohio State, Rutgers, Maryland, Maine, Norfolk State and many more but academics at the time resulted in me getting a lot of unofficial offers or “ verbal offers” until I could meet the academic requirements for Division 1. I didn’t reach the requirements which led to a lot of schools taking me off their boards and turning to a lot of Junior colleges to recruit me and between Garden City and Arizona Western I chose Arizona Western and me taking the Junior College Route.

Joe Gaiter: How was Juco life at Arizona Western College?

Corey Brown: JUCO was the wakeup call I needed in my career. Just having the chance to start off academically and make 3.0 and over each semester I was there showed the true maturity I had taken. Especially being far away from home where there weren’t any distractions. Football wise this was humbling because the amount of talent we had on each team of my freshman to sophomore year with majority of my teammates being on a NFL roster or being scouted by the NFL such as myself so you learn how to gel with different personalities and learn the similarities of the person when being from different places. We all struggled together and eventually became family even after we all graduated. We became family even with regular students there because we all had the same goal which was to get out of there and go on to our university being an athlete or not. 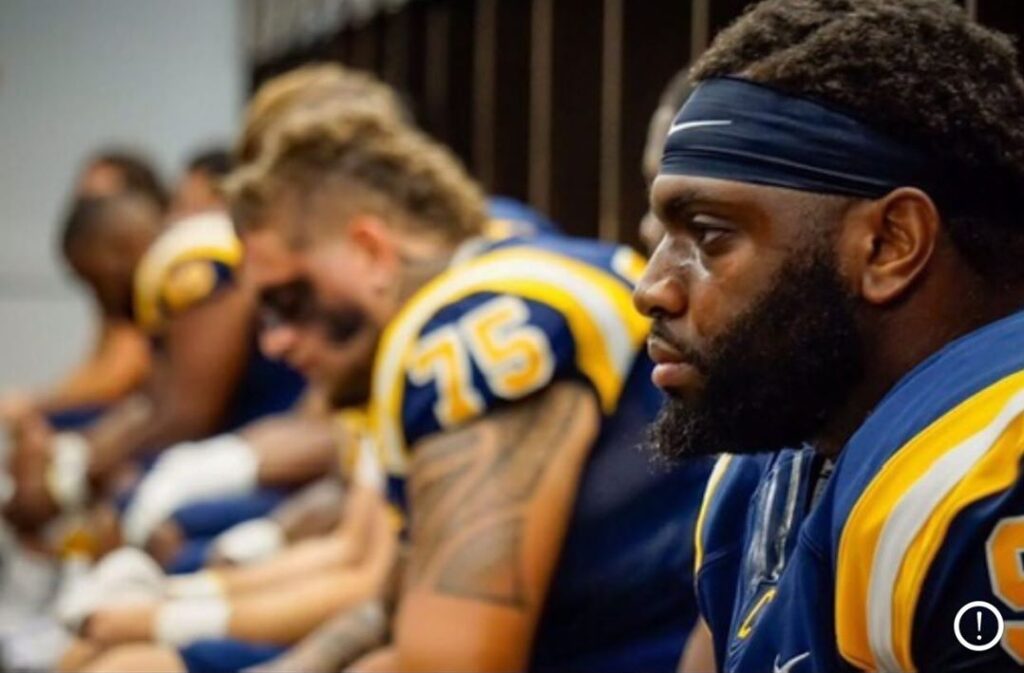 Joe Gaiter: How was your time at The University of Central Oklahoma?

Corey Brown: It was a learning experience coming from a Junior College and having over 50 offers. what made me choose Central was the culture that was presented and location which was the highest rated jobs in the field I wanted to be in which is television broadcasting. Now, the transition from a Junior College to a University and transitioning wasn’t hard student wise but becoming a more “around the clock” athlete with meetings, morning workout, and team bondings events just gave me the true experience on how college football was supposed to be at a higher level. Also showed how you represent the university everywhere you go and the football program. So you learn to be more cautious of what you say or do so that you leave a good mark on your name and the program’s name. From a football aspect it was learning more football schemes and formations to help you see where you supposed to be and how you doing your job helps you or your teammates make the play, day by day I took it upon myself to understand every position and responsibilities they had in order to know what the overall scheme was and it showed flashes at times. 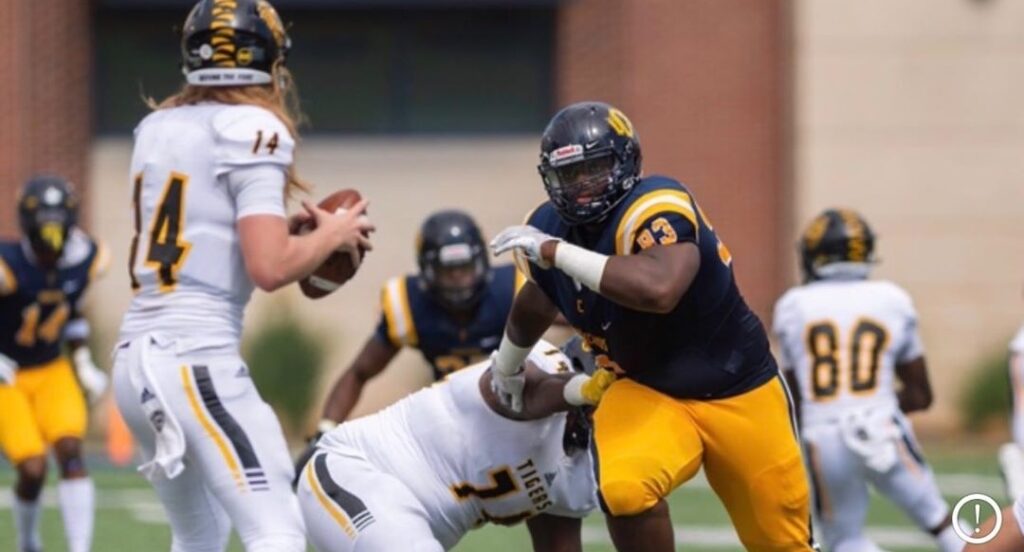 Joe Gaiter: How did you face adversity this year?

Corey Brown: There was a lot of adversity both mentally and physically. With the wear and tear on the body weighing over 300 pounds takes a toll and performing on a high level everyday with no breaks eventually led me into a foot injury which is fully healed now and mentally dealing with the first ever injury and not being able to be myself on the field really affected me mentally and emotionally. The way I knew I’d grown though was me not falling behind academically and made sure I was passing all my classes and eligible to leave after the fall. I didn’t not agree with the many methods that the program had for us as a team or individually and couldn’t see myself playing for them next year especially with no change in the near future so with my family help and prayers I decided to transfer. 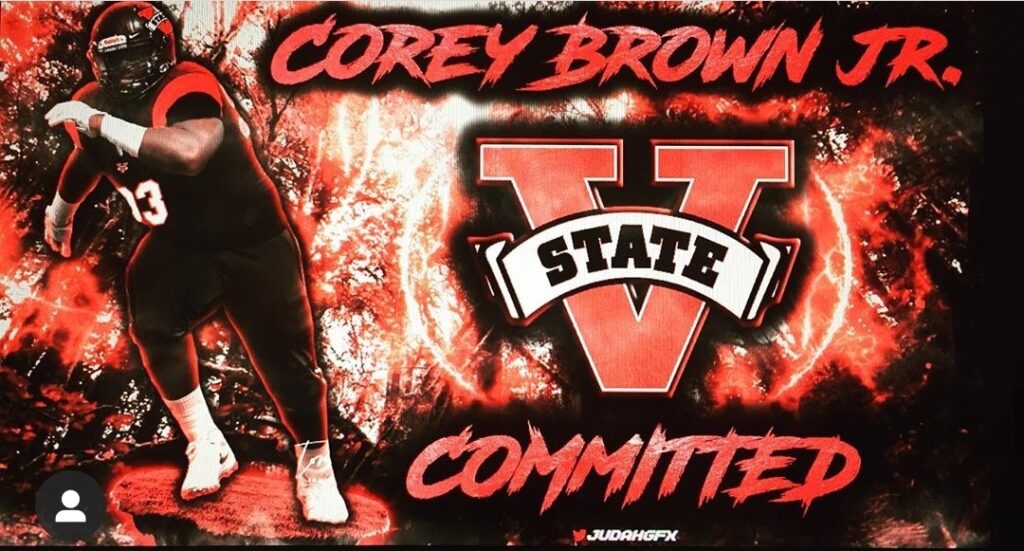 Joe Gaiter: What made you transfer to Valdosta State?

Corey Brown: The culture and the coaches such as Coach Stalker and Coach Goff really caught my attention. With the football program being the powerhouse it is and the coaches wanting me and willing to work with me knowing the injury and seeing the true potential that I have. Not trying to butter me up on the recruitment trip and taking the business approach to things really showed me that If I come in and do my job that everything would take care of itself. I made it clear to them that I wanted to play professionally and the coaches didn’t give me a pep talk. They gave me an honest answer which was to “use the platform here and perform and God would work it out”.

Joe Gaiter: Valdosta was 10-1 last season. What can you contribute to this powerhouse football team?

Corey Brown:I can contribute a big part to the leadership role and being the “anchor” to the defense. By bringing a vocal when needed and leading  by example mentality to practice everyday. Showing how hard I work while remaining humble. 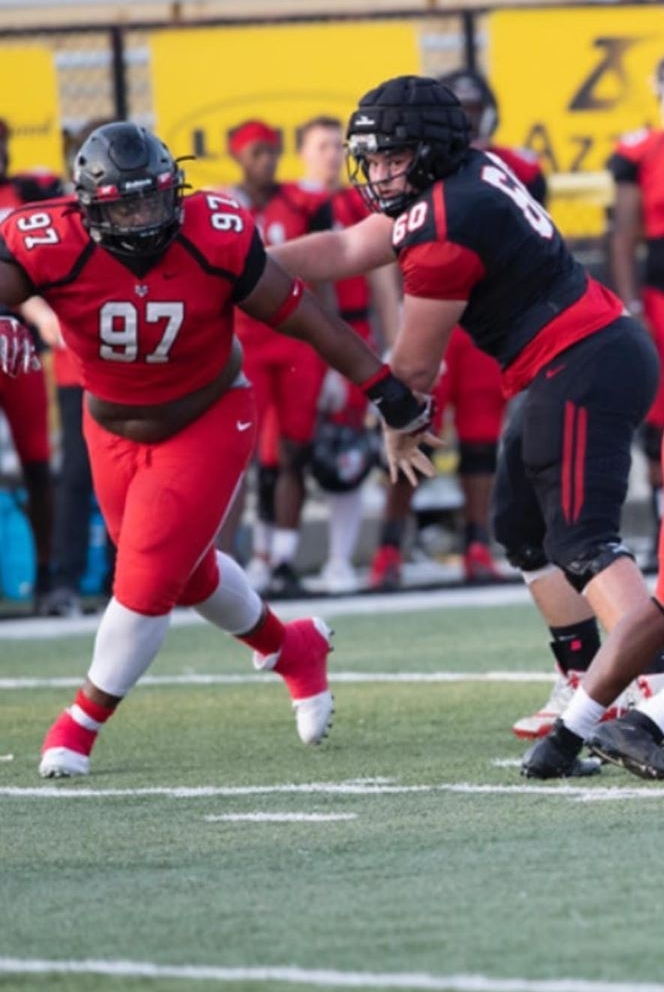 Joe Gaiter: Describe your style of play as Defensive Lineman?

Corey Brown: My defensive line play is very versatile but mostly a run stopper. By being constituent on doing my job and creating knockback while keeping my linebackers clean to do their responsibilities. I have a high football IQ where studying film shows me the tendencies of the offensive linemen, running back, and formations that the offensive coordinator likes to run in different circumstances. I get compared to NFL guys such as Dontari Poe or Gerald McCoy which I see a comparison with myself to their playing styles.

Joe Gaiter: As the backbone to any team, do you feel like the DL and OL gets the credit they deserve on the field?

Corey Brown: Overall, I believe we do. Especially from skill positions because they know our importance in order to win football games how much difference we can make in the game of inches. 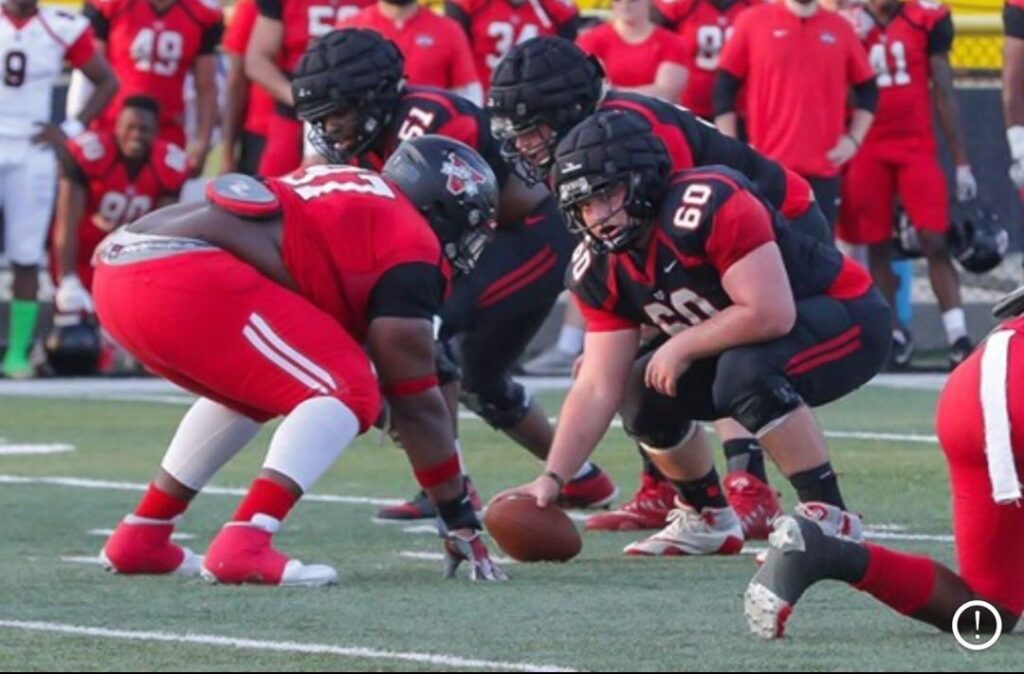 Joe Gaiter: What makes you different?

Corey Brown: What makes me different is the mentality I bring because I hold myself to a high standard which makes me my hardest critic. The standards of myself I hold are set from the poverty I grew up in and the surroundings I had around me. I had to push myself to get away from all of it. Now I know the sky’s the limit for myself.

Corey Brown: My major is communications. I plan on using it to become a broadcaster on television or radio.

Corey Brown: My untold story is that in the beginning I wasn’t always perfect and was headed down the wrong road that not too many people knew about. With the help of God I managed to see the mistakes I was making for myself and have the strength to change my life for the better for myself and my family. 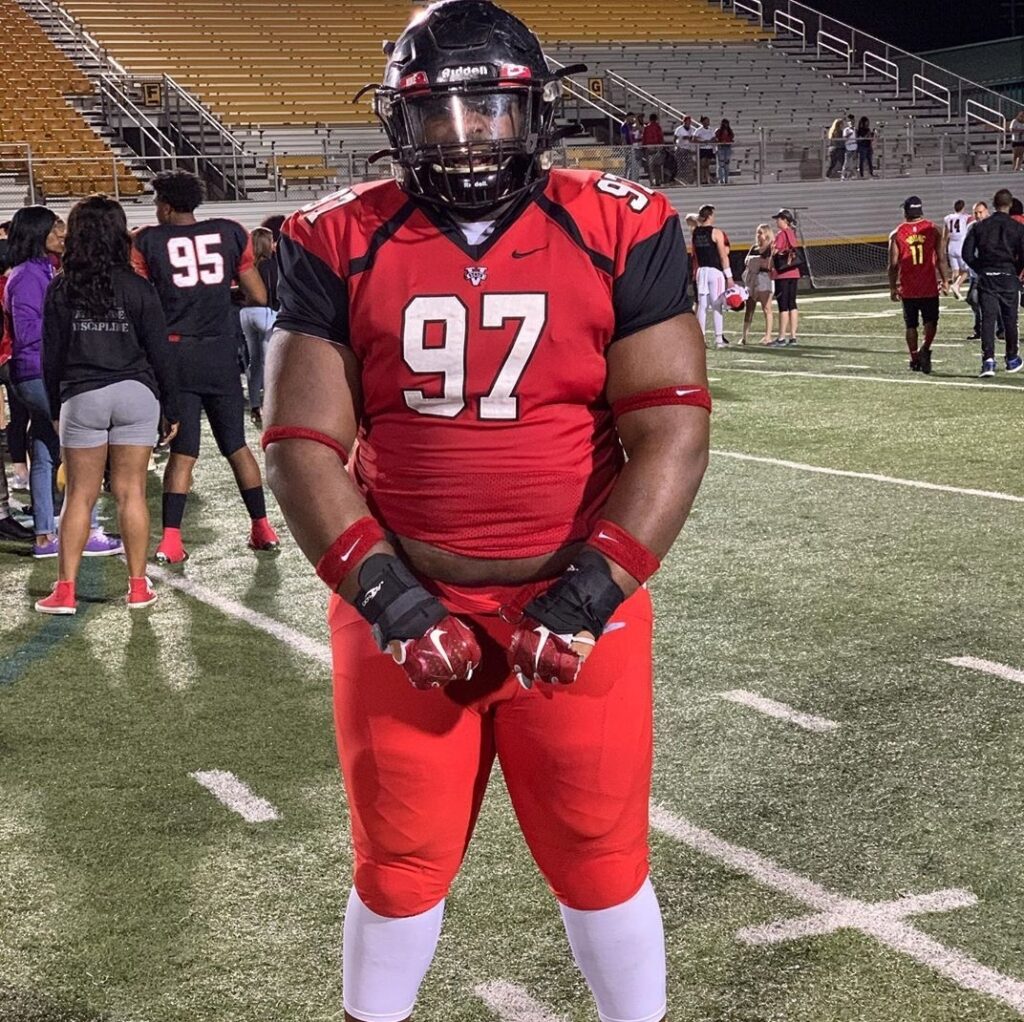 Joe Gaiter: Who are some athletes we need to watch out for next season?